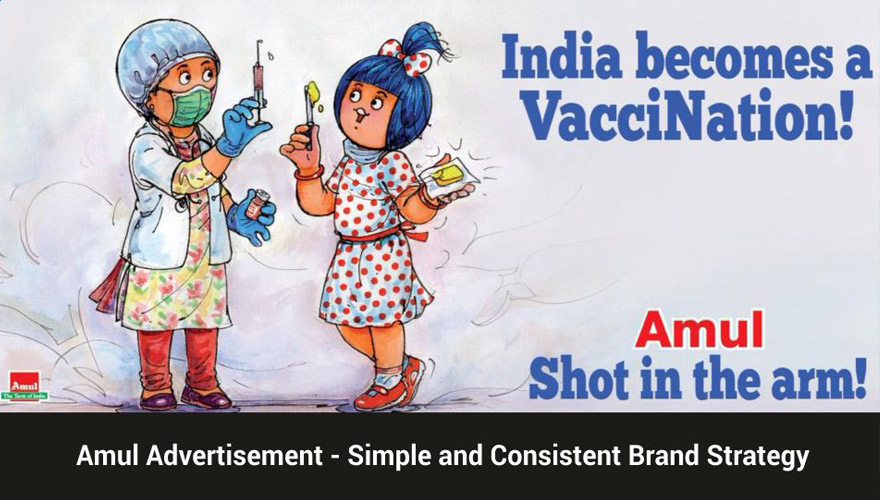 Amul – The Taste of India. Need we say more? No!

However, our love and connection with the brand Amul make us ruminate over it. A native brand success story example-Amul. A Consistent Advertisement elevating Brand Identity-Amul. The utterly butterly ‘Amul girl’ is an icon of middle-class India right from 1967. Woah! Do we have any other mascot that old?

The Amul girl is a hand-drawn cartoon of a young, chubby Indian girl dressed in a polka-dotted frock with blue hair and a half pony tied up. Maybe she is the reason Polka Dots are never out of fashion in India!

Back then, the brief provided by Amul was simple; ‘Draw a mascot which is easy to paint on walls and outdoors’. Huge outdoor print Advertisement was still to see the billboards. The advertisement idea of Amul was conceived by an agency called ASP (Advertising, Sales and Promotion) headed by Sylvester Da Cunha and his Art Director Eustace Fernandez.

It is an established fact that the Amul advertisements are consistent. They do a great job in selecting a trending topic and make an ad about it. Amul has a history of being brave. Through advertisement, they have often raised voices against issues, which are otherwise not considered relevant in FMCG product advertising. Most companies avoid getting into the dirt by commenting on political issues, unlike Amul. There were even controversies when AMUL commented on national political events such as ‘Emergency in India’ in 1976.

Although the content for the advertisement may be grave, yet Amul with its humor punch establish their view and brand in a subtle way.

Even the media strategy of AMUL advertisement was clear, crisp, and consistent. Almost all of their print advertisements come in the top corner of the third page in the main newspaper. Earlier it was Times Of India where this media innovation was to be seen, now we can even see it in other newspapers as well.

In communications terminology, we call it a strategy to create expectations of readers to find a particular kind of content in a particular place. Like we always open the supplement of Hindustan Times, Brunch from the last page expecting the fixed format short & interesting interview of a celebrity.

If you refer to the image below, this is exactly the spot on the 3rd page of Hindustan Times where you can expect an Amul advertisement. 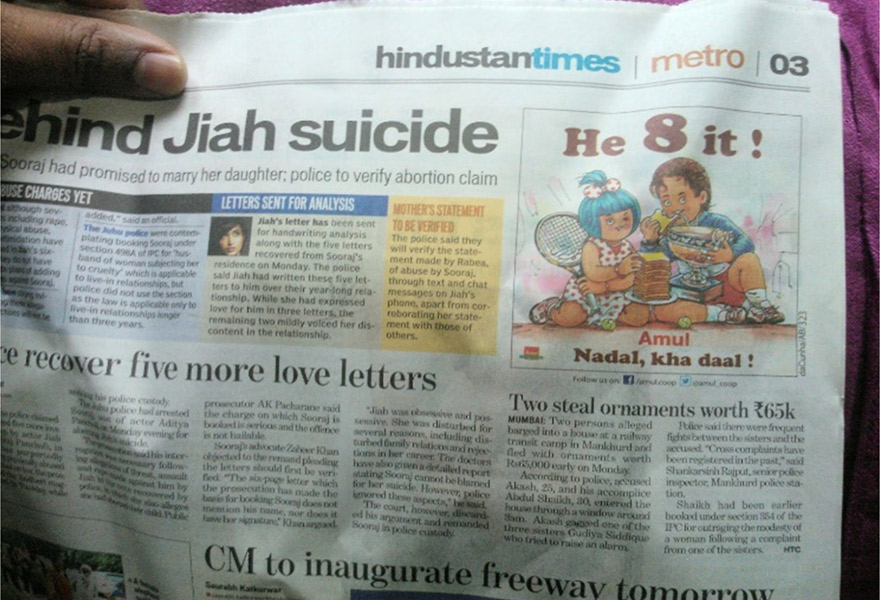 AMUL has just been ranked as the No. 1 Indian brand by Campaign magazine in its list of Top 1000 Brands of Asia for three consecutive years. AMUL is one brand that is sticking to the old-school way of brand strategy. They develop simplistic content and campaign; which would lead to mass appeal. The product connection achieved through a planned brand strategy eventually establishes a product with a brand identity. In the long run, for businesses to prosper in the cutting edge marketing and competitive era; Brand Identity is mandatory. People of all ages or rather generations can relate to the brand Amul or their mascot. Although advertising plays a critical role in getting this coveted rank yet, product management also has to be hailed and saluted. Amul has not only flagged itself via nurturing a consistent brand identity, but it has also penetrated households with dynamic products today

There is so much to learn for upcoming products and brands from AMUL that started 65 years back in a small town in the state of Gujarat called Anand.