Made in India – 20 Famous Indian Brands thriving throughout the World 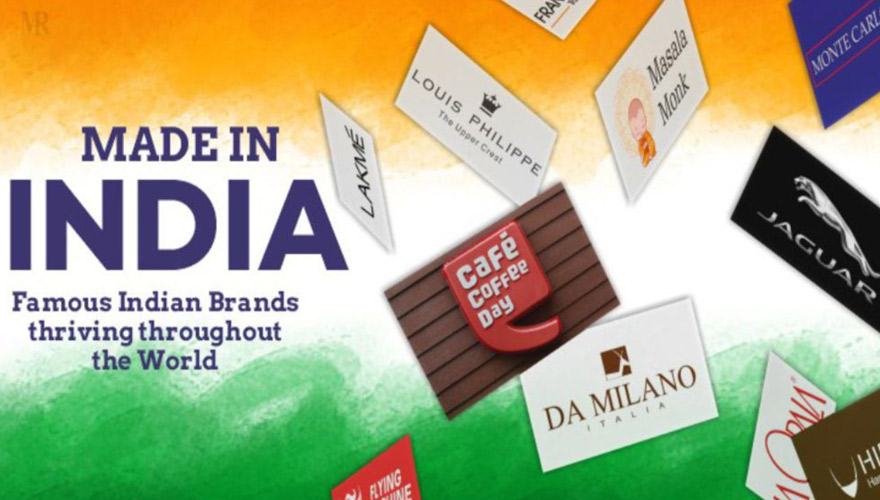 Today, there is a huge hype around made-in-India products. This initiated me to research and write about Famous Indian Brands.

We are surrounded by numerous brands mostly dominated from all over the world. But as I was researching Indian brands – I was pleased to know that several Indian brands are dominating the world through their products and services.

Somebody may question the significance of Indian brands in the Western-dominated modern world. It would be good to enlighten them with the names of Indian brands that they thought were foreign. There exists a collection of brand goods that we pass off as imported. They are hiding amazing Indian stories of ambition and resilience.

Truly Made in India: Origin of Famous Indian Brands

The initiative of Indian brands was taken after independence from 1952. For instance, Jawaharlal Nehru was concerned about Indian women using foreign cosmetics. So on his instruction, JRD Tata and Simone Tata created Lakme.

Changing the attitude towards creating something new is essential for Indian brands to grow. In the words of JRD Tata, “Never start with diffidence, always start with confidence.” Success stories are made only when someone decides to change the course of his or her life.

Overcoming social stigma can take you a long way to achieve your goals. A persistent attitude is essential in getting a position as an Indian brand among international brands.

Some of the following famous Indian brands were originally foreign and now have Indian owners. Others were created in India but flaunt European names. They strive to produce famous products in India. Here is a list of 20 famous Indian brands that live up to the international standard.

Originally a British company, this brand was established in 1893. The old Royal Enfield bikes were produced under the Enfield Cycle Company, as it was called then. Eicher Motors, an Indian motorcycle company founded in 1948, bought it in 1994. The name was also changed to Royal Enfield India. The characteristic thumping engine sounds and high-capacity engines of these bikes made in India enthrall our ears.

Van Heusen is a clothing brand under PVH Corp., formerly called the Phillips Van Heusen Corporation. Founded in 1889, PVH was named after Dutch immigrant John Manning Van Heusen. Van Heusen India, the Indian section of the brand, is owned by Aditya Birla Fashion and Retail Limited. The products of Van Heusen India are made in India. ABFRL is India’s first billion-dollar fashion powerhouse.

Allen Solly was created in 1744 by William Holin and Company Limited. However, the apparel brand came into Indian hands in the late 20th century. It was bought by Madura Garments in 1993. Soon, Aditya Birla Group acquired the ownership rights in 2001 and turned it into a famous Indian brand. Designed mainly for men, Allen Solly shirts have a popular fan base in India and abroad. Living in the digital world, we can easily order snazzy clothes from the Allen Solly online store.

Usually deemed as popular foreign liquor, Old Monk Rum is an Indian dark rum brand. It was first brought to the market in 1954 by Mohan Meakin Limited in Ghaziabad, Uttar Pradesh. The lack of advertising has not stopped it from being the biggest Indian Made Foreign Liquor Brand (IMFL) for several years. In 2013, it was the world’s largest black rum-selling company. Old Monk is made in India and sold by retailers in Russia, Japan, the USA, Estonia, UK, and other countries.

Peter England shirts bring along the smell of cinnamon tea and lace doilies. However, this is also a famous Indian brand owned and operated by Madura Fashion and Lifestyle, a subsidiary of the Aditya Birla Group. Founded in 1997, Peter England is one of the largest menswear brands in India. You can give an excellent interview if you don a Peter England t-shirt.

Despite having an Italian designer named Chicco, Flying Machine is a famous Indian brand. It was developed in 1980 by Arvind Lifestyle Brand Limited. It holds the distinction of being the first indigenous denim brand of India. It shines among the coolest youth apparel brands selling denim clothes made in India.

Lakme, a posh French name, may echo in everybody’s lips but is a famous Indian brand. This cosmetics company was named after the French opera Lakme, which is also derived from the Hindu Goddess Lakshmi. Lakme started as a subsidiary of Tata Oil Mills (Tomco), part of the Tata Group. It is owned by Hindustan Unilever and operated by CEO PushkarajShenai.

Masala Monk is a famous Indian brand launched in 2018 by Shashank Aggarwal, a blogger, and businessman. His company offers lip-smacking food ingredients that have won many hearts. According to the Masala Monk website, they deliver “sauces, pickles, fruits, grains, dips, mixes, spices, and a lot more.” Masala Monk founder had also trended on social media earlier this year for his witty reply to a communal question.

Named after the famous Alps destination, Monte Carlo Fashion Limited is a leading Indian clothing brand for men and women. It was established in 1984 by OswalWoolen Mills Limited. Nahar Group, based in Ludhiana, Punjab, is its parent company.

Named after the French monarch Louis Philippe (1830-1848), the name brings a pseudo feeling of France to us. It is a famous Indian brand of men’s clothes started in 1989 by Madura Fashion and Lifestyle. The luxury apparel made in India is craved by many people.

Every college student is familiar with the homely ambiance offered by CCD restaurants. Café Coffee Day is an Indian coffee chain owned by Amalgamated Bean Coffee Trading Company, based in Chikmagalur. The first CCD café was set up in 1996 in Bangalore. Presently the Indian brand has spread overseas to places like Vienna, Prague, Karachi, and Dubai. It currently owns plantations, grows the coffee, and makes coffee machines and furniture for its outlets.

Emerging as a fierce competitor in the gadget world, Micromax first started as an IT software company in 2000. This Indian consumer electronics company is a famous Indian brand based in Gurgaon, Haryana. It achieved international recognition by surpassing South Korea’s Samsung by the maximum number of phones shipped in a single quarter of 2014. Celebrities like Akshay Kumar, Twinkle Khanna, and even Hugh Jackman have been brand ambassadors of this Indian brand.

Several customers are dazzled by the Italian flavor of this brand. But Indians would be delighted to hear that it is an Indian brand. Sahil Malik spearheaded the growth of Da Milano after taking over his father’s business in 2000. It was originally launched in 1989 as a leather goods exporter. Da Milano manufactures top-notch leather goods and home décor made in India.

Jaguar is the luxury vehicle brand of the British multinational car manufacturer Jaguar Land Rover. It was originally founded as the Swallow Sidecar Company in 1922. In 2008, Ford sold both Jaguar Cars and Land Rover to Tata Motors, the two brand names merging to form Jaguar Land Rover in 2013. Indian-owned Jaguar has produced vehicles for the British Prime Minister as well as Royal Family.

Amrut Single Malt is an Indian liquor brand that gained international renown within a few years of its rise. It was credited as the world’s third-best single malt which is made in India. It hides a fascinating story of the growth of a small liquor business founded in 1948. Neelakanta Rao Jagdale ambitiously transformed it into a globally famed whisky company by 2009. The liquor is distilled and brewed at the Amrut distillery in Bangalore.

Hidesign is a global leather goods manufacturer and famous Indian brand based in Pondicherry. Dilip Kapur founded it in 1978, with the first store opening in 1990. Its fine leather products and accessories are made from material acquired from Tamil Nadu’s tanneries.

Most people would be deceived into believing Munich Polo is a German brand. It is an Indian brand specializing in kids’ apparel. Its parent company is “Catmoss Retail Private Limited”, a project led by Ashwin Chawla and Sudipt Ghosh

Adding the ‘La’ brings a feeling of France, yet La Opala is again an Indian brand. It specializes in manufacturing and selling high-quality cutlery and tableware made in India. Sushil Jhunjhunwala created this company in 1988.

While pronouncing the name you inevitably harbor an Italian accent. Yet Franco Leone is an Indian creation specializing informal footwear for men. Founded in 1989, it is led by Vishal Bhambri. He was initially a footwear technologist and later matured into a shoe perfectionist with his brothers Vikram and Vikrant.

Almost all Indians would wince at the sound of this name. The British East India Company was once an imperialistic trading company that ruled over almost half of the globe. Now it is a high-end luxury goods provider owned by none other than an Indian, Sanjiv Mehta. Who’s laughing now, right?

The next time you venture outside for shopping, keep in mind these famous Indian brands. Let the variegated products made in India capture your senses.